Esports Viewership vs. Sports in 2019

There’s a lot of buzz around esports these days. In particular, headlines around the viewership numbers that major events are drawing. Understanding these eyeball numbers is an important task for many within the esports and traditional sports ecosystems, from sponsors to media distribution companies to team organizations. The reality is, when comparing viewership numbers for esports with those of traditional sports, it’s not always a perfect apples-to-apples comparison. There are several reasons for this, and while creating a perfect formula for comparing individual data points would be challenging at best, we’re hopeful that this piece and the framework it provides can help the general public better understand trends in viewership data by focusing on higher level data. 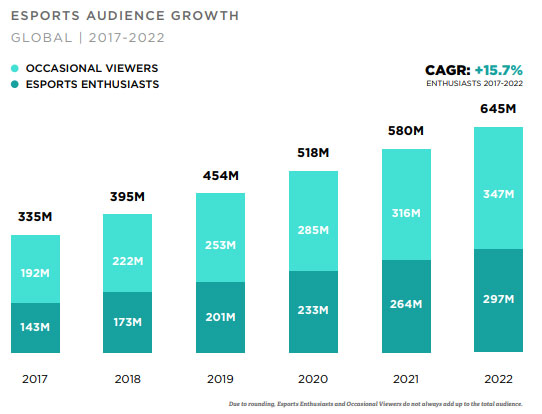 According to Newzoo’s 2019 Global Esports Market Report, there were approximately 395 million total esports viewers globally in 2018. Newzoo segments esports viewership into “occasional viewers” (people who watch professional esports content less than once a month) and “esports enthusiasts” (people who watch professional esports content more than once a month), which can be an important differentiation for those seeking to invest in esports given the oft published viewership comparisons to traditional sports.

Newzoo estimates that by 2022, the number of esports viewers globally will grow to 645 million, with “occasional viewers” and “esports enthusiasts” growing from 222 million to 347 million and 173 million to 297 million, respectively, between 2018 and 2022.

Another important consideration is the regional breakdown of esports viewers. While roughly 50% of viewers considered “esports enthusiasts” by Newzoo are located in Asia Pacific -- North America, Europe, and the rest of the world each represent at least 10% of the total number. Unlike many traditional sports – with soccer, or football, as it’s more broadly known, as a notable exception – the audience for esports is truly global.

This all being said, many would argue that the above analysis is a bit unfair. After all, “esports” isn’t a single game. “Esports” encompasses competitive play in countless titles across a number of genres, from Multiplayer Online Battle Arenas (“MOBAs”) to Real-Time Strategy (“RTS”) and everything in between. Taken a step further, the audience by game title can vary, similarly to traditional sports. While Dota 2 tilts to an Asian audience, CS:GO has a prominent EU base. However, one could easily counter that this only broadens the potential Total Addressable Market (“TAM”) and longevity of the esports phenomenon… but I digress.

Related: How to Invest in Esports - Digging Down into the NERD Index

While the exact definition for esports will vary depending on who you ask, most would agree with the following: esports is playing video games competitively. As alluded to above, this includes countless different titles, a number of genres, multiple types of gaming devices, and varied structures to competitive play.

Esports, by definition, had to start after video games were “invented”. The first “esports event” was likely held in 1972 at Stanford University, where players competed in a decade old game called Spacewar. Later, esports crowned its first celebrity in Billy Mitchell, who at one point held records in arcade games Pac-Man and Donkey Kong (years later, Billy’s activities would retroactively become esports’ first major scandal).

Advances in technology accelerated the growth in esports, from the NES (Nintendo Entertainment System) in the mid-80s to the proliferation of PC gaming which, with a little help from the Internet, allowed gamers to compete without being in the same location. The rise in PC gaming saw the advent of the first esports leagues, as well as esports events that look a lot more like today’s events than they did at Stanford in 1972. One event, for a popular game title ‘Quake’, caught the public’s attention when eventual victor Dennis “Thresh” Fong took home a Ferrari 328 GTS.

Technological advances continued to move the industry forward, culminating in the introduction of video streaming technology (not to be confused with game streaming) which has had a tremendous impact on esports, and gaming more broadly, leading us to today’s manifestation of the competitive gaming industry.

“Traditional” sports have a much longer history. Nearly every ancient culture enjoyed some form of “sport”. Perhaps best known is the sporting history of Ancient Greece, which gave birth to the bi-annual sporting festival commonly known as the Olympic Games. The games themselves have evolved over time, with some pastimes showing stronger staying power than others. For example, wrestling has existing in some form or another for 5,000 years, while others developed comparatively later, like soccer (2,000 years ago) and basketball (130 years ago).

Many of the recent technological advances that have helped enable the rapid growth in esports have also affected traditional sports, as well (think goal cams).

Five differences between Esports and Sports

While it’s impossible to highlight all of the differences between esports and sports, there are some key differences worth noting: 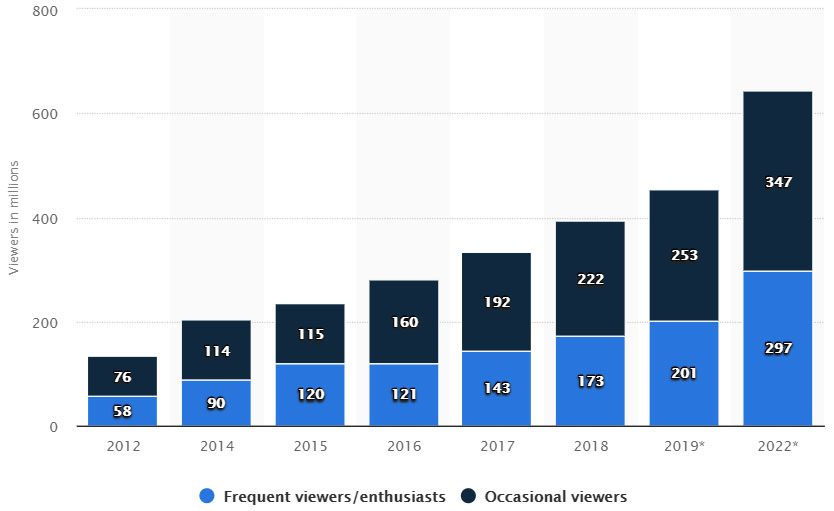 Games tend to come and go in terms of popularity, though a few titles have managed to capture the public's attention for an extended period of time. Esports mainstays like Counter-Strike: Global Offensive (CS:GO), League of Legends (LoL), and Defense of the Ancients 2 (DOTA 2) fight for eyeballs against upstart games like Overwatch and Fortnite.

In the case of two of the aforementioned titles, the prize pool dollars are meaningful - and above that of various traditional sports. DOTA 2’s flagship event, The International, has long-held and annually broken the record for largest single-event esports prize pool, most recently totaling $25.5 million in 2018. Tencent-backed Epic Games’ recent hit title Fortnite and the 2019 Fortnite World Cup finals plan to give the 2019 International a run for its money (pun intended), with a final event prize pool of $30 million.

Esports viewership is expected to grow to 644 million by 2022 (347 million occasional viewers and 297 million esports enthusiasts). This represents a growth in total viewership of 63% over the next 4 years.

Which titles will catch the most eyeballs? Well, that is anybody’s guess. Fortnite didn’t exist in 2016. Nor did the Overwatch League, or the Call of Duty World League in its new form. The esports industry, much like the gaming industry more broadly, is a hit-driven industry. This makes it increasingly important for those looking for exposure to consider a broader based approach in the absence of specialized knowledge or views.

Related: Thematic Investing 2.0 - Why is it Important?

Traditional sports viewership is still larger than esports. This may remain the case, even accounting for esports’ recent growth trajectory in comparison to that of traditional sports. Indeed, the sports industry is one of the few types of programming that can still command millions of viewers at a time on linear television. 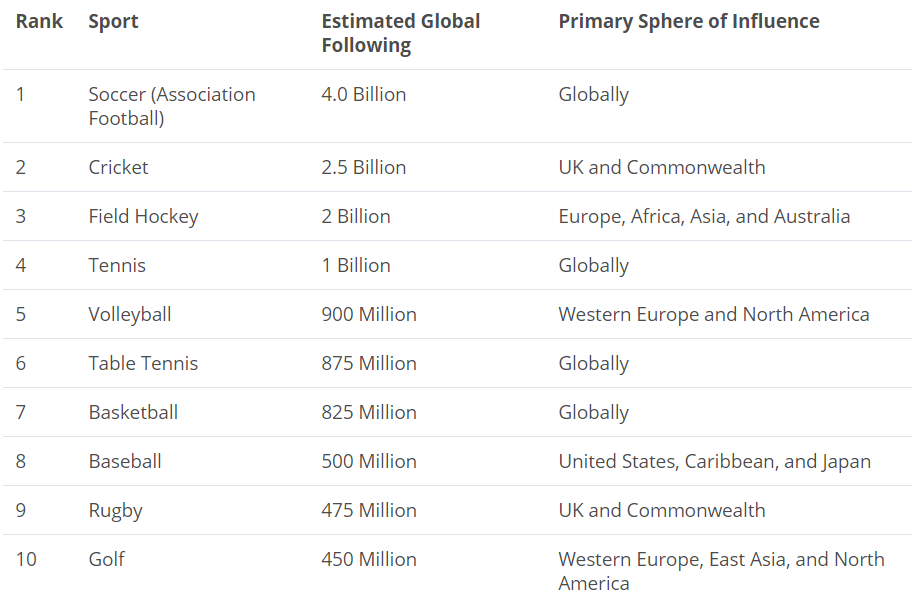 While some analyses of audience data comparing esports to traditional sports suffer from differing approaches to the measurement, estimates for overall fans seems to offer a more apples-to-apples comparison (though surely different surveys will use varying estimation techniques).

As with any projection, it’s difficult to say where sports viewership goes from here. It’s hard to imagine powerhouses like soccer or cricket experiencing a fall from grace. Overall trends will likely not tell the whole story, either. Thus, while a more in-depth analysis would be required to break-down expectations for the traditional sports industry, there is certainly room for esports to continue earning a higher proportion of the overall eyeballs moving forward.

Demographic changes need to be considered. Esports are relatively more popular with younger consumers, many of whom grew up playing video games and who have an innate understanding for gameplay that previous generations do not. Moreover, esports viewers (specifically, enthusiasts) are more likely to maintain full-time employment than the overall online population (67% vs 53%) and have high household incomes (43% vs. 30%).

Regional considerations should be made, too. For sports popular in the Asia Pacific region, the tide of fans may already be well underway. Does it continue? Or has it reached a steady-state? In other regions, those tied to the traditional sports ecosystem would be wise to closely follow local adoption of esports. In fact, many have.

Technological advances may once again play a hand in shaping the future of esports and sports viewership. Advancements in mobile technology have already made it so that 5 billion people globally have a mobile phone, with over half of the devices being smartphones. The introduction of 5G connectivity, widely expected to take place in the next few years, will increase people’s ability to access content that requires an internet connection.

The Future of Esports

The esports industry appears to be entering an exciting stage of its development. Financial investments into leagues and teams have left large parts of the ecosystem extremely well capitalized. The proliferation of game-streaming has placed it squarely into the mainstream, with well-known streamer Ninja recently appearing on the cover of ESPN The Magazine. The roll-out of 5G gives mobile esports a ton of potential. Will the franchise league model work? Will top-players bargain for better economics with teams given the value of their streaming careers? Will we get a new genre, a la Battle Royale in the late twenty-teens? I just don’t know, but I am excited for whatever comes next.

There are a lot of ways to measure viewership, and unfortunately, it’s not always clear how best to compare two numbers. Making matters worse, esports and traditional sports are just not the same. Different origins, growth trajectories, demographics, viewing mediums, and countless other factors make it difficult to compare the two, and even more difficult to predict the future. Traditional sports still garner more eyeballs than do esports. Does that change, and if so… when?