Small BYTEs – What in the World is Going on with Data Centers?

Data centers are one of the key verticals of the $BYTE Index and events of the past month shed light on why. Three seemingly unrelated news stories recently emerged, each of which points to a future thirsty for core digital infrastructure assets: data centers.

As a reminder, data centers are where the internet lives. When you stream a movie or play a game in the metaverse, you are accessing bytes of data that are delivered to you from a data center. These are generally large buildings filled with servers that store and transmit your internet experience.
Let’s dig into what’s happening. 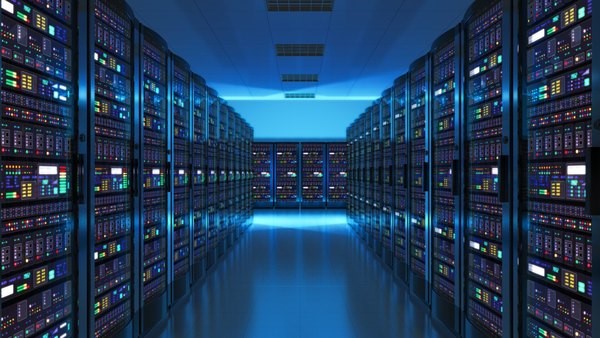 The inside of a data center is a secure, reliable, cooled environment filled with endless rows of servers

Let’s start with Meta (formerly Facebook, Inc.). Meta is best known for its ubiquitous services: Facebook, Instagram, and WhatsApp. It also is investing heavily in an increasingly virtual future (the metaverse).

Meta’s core services show up on our screens as if by magic, yet the data that underpins that magic is delivered to you from very real buildings called data centers. Meta’s services live on the servers stored in those buildings. As a result, the company’s product performance relies on having Class-A data center real estate around the world.

Achieving that goal does not come cheap. A data center campus - which can house several distinct data center buildings - can cost multiple billions of dollars, as Meta’s own disclosures show. Data centers are massive structures with highly engineered environments. They provide well-located space, low-cost power, and a reliably cool environment for the servers and connection points that deliver our internet experience.

As I’m writing this, we have 48 active buildings and another 47 buildings under construction, so we’re going to have more than [90] buildings in the near future…

Holy mackerel - that sounds like a lot! We need to do some math: From 2010 through 2019, Meta invested over $16 billion developing data centers. It has continued to pour money into DCs for the past two years. With plans to double its existing data center footprint, it’s safe to assume Meta has budgeted well over $25 billion for data centers alone over the coming few years! For comparison purposes, Twitter’s entire market cap is $35 billion.

If Meta spun out its data centers as a standalone business, it would be one of the three largest independent DC operators in the world. Amazon and Google could say similar things. Each uses physical infrastructure as a key front from which to fight the battle for digital competitive advantage. And each is accelerating investment in these physical assets. Thirsty for digital infrastructure, indeed.

CoreSite is being acquired by American Tower for over $10 billion

Six days after Meta’s disclosure, two large, unrelated M&A transactions were announced in the data center space. Both are BYTE Index constituents (as is $AMT):

Why? What is happening?

In a one-week period, we learned:

These points come on the heels of Blackstone’s summer 2021 acquisition of QTS for $10 billion (QTS is a direct competitor to CyrusOne). Since those announcements, we have also seen rumors of an imminent $11 billion acquisition of Global Switch, a privately held data center business. The CoreSite, CyrusOne, and QTS acquisitions are the three largest data center buyouts in history. Global Switch would expand that list to four. And they all happened in a six-month period.

Albert Einstein is reported to have said “compound interest is the eighth wonder of the world.” The longer exponential growth persists, the less our intuition is capable of conceptualizing the ultimate scale.

That same logic applies to data consumption: our demand for data has been growing exponentially for decades. The shelter-in-place policies resulting from COVID accelerated that already breakneck growth rate. 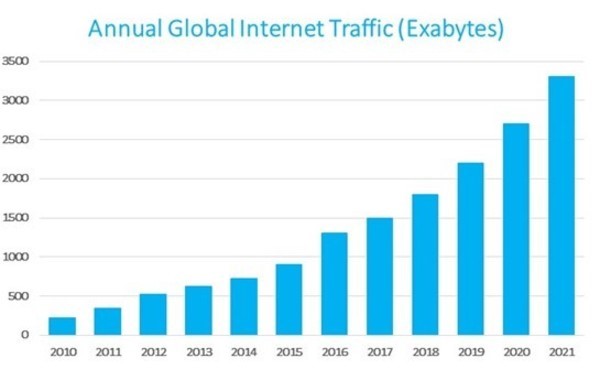 There is every reason to believe this data consumption traffic trend will persist. This data has to be stored somewhere. Not only is our demand for data growing, but our expectations around performance and availability are growing with it. We don’t just use our phones for voice and text, we use them to stream YouTube, hold Zoom calls, and edit documents in the cloud. At home, DVD players are gone, replaced by Netflix and HBO Max.

This all requires a physical architecture for the internet that moves closer and closer to the “edge” of the internet – where end-users reside. Fast (fiber) and ubiquitous (5G) are massive investment trends that knit together and help deliver this edge architecture.

But core to it all is the internet’s houses: data centers. And data is not just stored at one data center - it is replicated everywhere. As we push the circumference further and further out, the area of the circle expands exponentially. Digital infrastructure fills that circle.

Data centers are some of the most critical and valuable real estate assets in the world. Everyone knows the three most important features of real estate are "location location location." Whether hotels, homes, retail, cell towers, or data centers, "location" is definitionally scarce - the best locations are hard to compete against.

What American Tower (CoreSite), KKR (CyrusOne), Blackstone (QTS), and Meta are solving for is to control the best locations. They want to own the trophy real estate of the 21st Century: assets that can deliver unmatched performance to end-users. They also see endless growth in front of them.

Each time a company places its servers in a well-located data center, it raises the bar for competition, strengthening its competitive edge. As the next best location becomes more and more expensive, the value of existing data center portfolios grows. We have seen this in the record-breaking data center M&A of 2021.

Digital infrastructure assets continue to benefit from the exponential growth of the “Internet of Everything” trend. Each time we unlock more storage and delivery capacity, new use cases emerge to fill it. This reflects a seemingly insatiable human desire for the fruits of digital consumption. Families demand it. Businesses live and die by the success of their digital strategies.

No company is untouched by this form of modernity. The frontiers of competition are increasingly online. Data centers are the stadium within which the competition takes place. Tickets are selling fast. Part of BYTE’s core mission is to democratize seats in the owner’s suite, from which to experience the action.

The BYTE Index is designed to measure the most important global trend of the next 50 years: the digitization of everything. Data wants to be free, and digital infrastructure enables that future. The $BYTE Index provides access to that vision.

How to Invest in Digital Infrastructure

Small BYTEs – What in the World is Going on with Data Centers?