Gaming During a Crisis

Earlier in March, Roundhill shared a brief post looking at how gaming stocks typically perform in an epidemic. The purpose of that post was to show investors how a basket of AAA Gaming Companies performed during prior epidemics. My co-founder Will expanded on the impact here.

A lot has changed in the weeks that followed. The crisis continues, and while I am not an expert on the virus, it’s hard to argue that things have gotten better since the original post. With that said, I wanted to take a deeper dive into how the ongoing health crisis is impacting the gaming industry.

The Latest on the Virus

I’ll leave the detailed coverage of the health implications to the media, but a few high-level US-centric things to consider that I’ll tie back to gaming.

These steps were taken to stem the spread of the virus. Hopefully people are listening. Assuming that they are, we can make a few assumptions about the population that is listening.

First and foremost, people are spending considerably more time at home. Many are no longer commuting to and from work. Going to the gym may not be the wisest move. Patronizing restaurants and bars is largely on hold. Instead, people are likely exercising, eating, and drinking at home. For many, this is a material change in social behavior.

The above “social distancing” generally serves to increase overall time at home. This should be, at least in theory, a benefit to the gaming industry - one that may outlast the crisis itself. The impact specifically on esports is a bit more nuanced, with in-person events largely being postponed or cancelled alongside traditional sports .

Extroverts looking to replace their time out with friends might decide to drop into Fortnite to catch-up with their friends. Traditional sports fans looking to get their competitive fix might turn to esports or game streaming. As of March 17th, the following esports have moved competitive play online: Overwatch League, Call of Duty League, LCS (League of Legends), LEC (League of Legends), Flashpoint (CS: GO), and Honor of Kings League. This would be impossible for traditional sports.

Is More Time & Money Being Spent on Gaming?

Anecdotally speaking, yes. Friends of mine, many of whom would not self-identify as “gamers”, are buying new consoles and reaching out to ask what I’m playing (or if I want to drop into the new Call of Duty: Warzone). I bought the latest Need For Speed, a franchise I loved as a kid but haven’t been that involved in for years.

Esports are getting attention as well. Bloomberg put out a piece on esports as a substitute for traditional sports. The Phoenix suns are playing out the rest of the season in NBA 2K (link). F1 drivers have turned to virtual racing (link).

Anecdotes are helpful, but they aren’t worth much without data to support them. And while it’s still early, we are starting to see data that does just that.

As always, we’ve been sharing these updates via social, but a few key data points have come out over the past few weeks that are worth noting:

Building on the above, we’ve included 4 charts from TwitchTracker and SteamDB that help illustrate the impact on gaming in recent months. 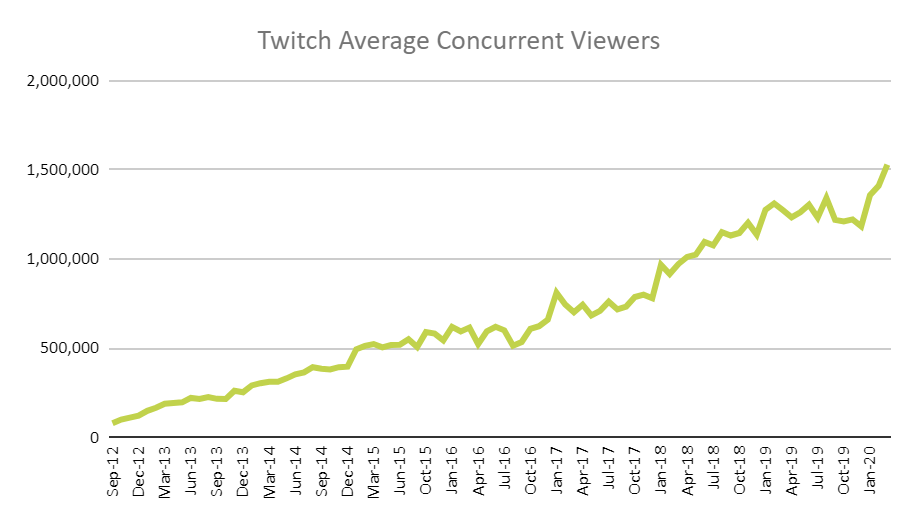 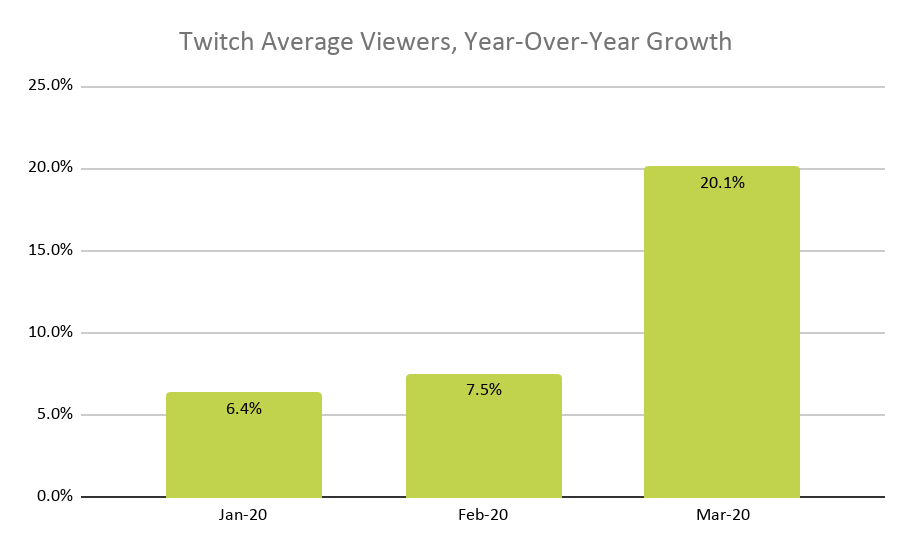 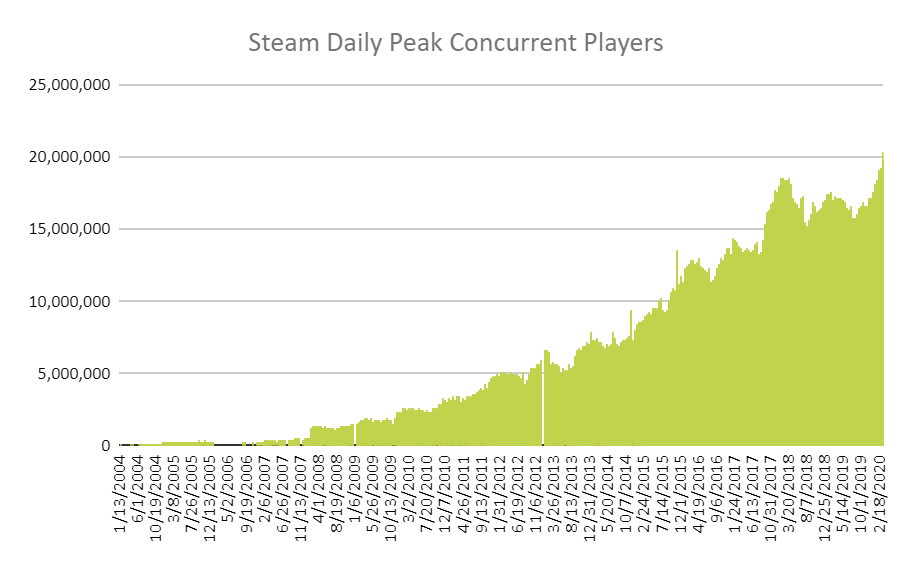 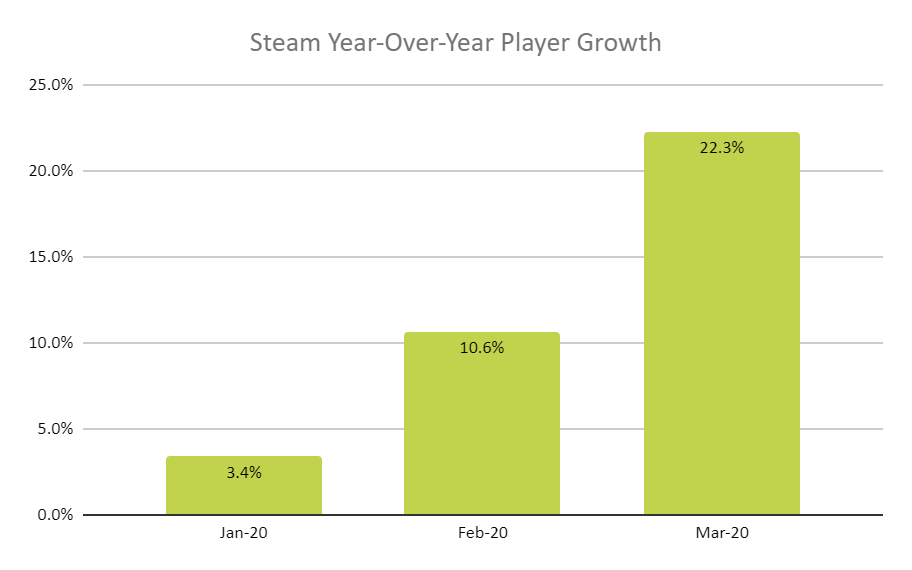 To put everything above in perspective, I believe we’re very early in understanding the impact on gaming. A lot of the data that we’ll need to truly understand the impact won’t come for until first quarter earnings reports. I would venture to guess that companies across the ecosystem will benefit, but only time will tell.

In addition, many are suggesting that the imposed quarantines will result in a significant reduction in economic activity, and perhaps, a global recession. Historically, game sales have held up during these periods, including growth in 2001, 2008, and 2009 -- see below. 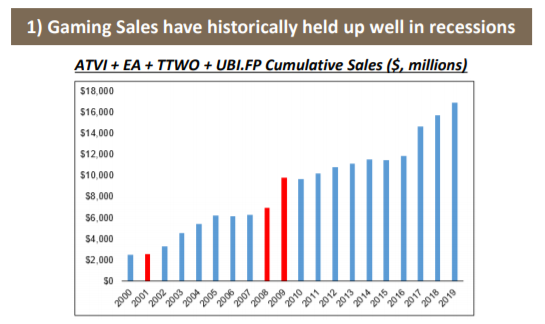 Looking at the NERD Index Holdings

While we wait for more data from individual companies, we thought it might be useful to our readers to take a look at the companies in the NERD Index and examine the financial health of our holdings. As I mentioned above, gaming is uniquely positioned to weather a pandemic-induced recession. Nonetheless, we find this exercise to be valuable in better understanding the sector’s ability to navigate difficult times in the global economy.

In the chart below, we analyze the profitability and cash hoard of each of the 25 companies included in the Index.

For our analysis, we’ve included cash on hand, net debt, and two profitability metrics -- trailing 12 month EBITDA, and trailing twelve month net income. While we understand that backward-looking metrics may be suboptimal in such a fast-moving environment, we believe that they may prove conservative given the aforementioned setup for the gaming and esports industry. If you’re unfamiliar, check out these articles for more on EBITDA and net income.

What we’re looking to understand is (1) how much cash our companies had on hand as of the most recent reporting period, (2) how indebted they are, if at all, and (3) roughly how much money they earned in the most recent 12 month period. While this is by no means a complete analysis as to the credit risk facing a company, we believe this is a useful exercise to understand how much flexibility a company will have to maneuver in volatile markets.

We’ve argued above the ongoing crisis may actually be beneficial for gaming companies. But even if we don’t see increased revenues or profits, our Index appears to be notably well-positioned.

Looking at cash, we can generally see robust balance sheets, with 11 of the NERD Index holdings with over $1 billion USD on hand. Two positions - Tencent and NetEase - hold over $10 billion each.

Finally in terms of net debt, which subtracts cash from a company’s indebtedness, we see a very strong portfolio. Only 5 holdings had positive net debt, which means the remaining 20 all have cash in excess of their liabilities. Compare this to other industries that employ significant leverage such as energy or utilities, where companies entered the year with four, five, sometimes six as much debt as they do cash. All in all, gaming and esports companies appear uniquely positioned to weather the storm.

I continue to believe that the ongoing crisis, while terrible on a human level, will benefit the gaming industry. Even if I am wrong, I believe the companies in our Index are well-positioned to navigate the increased volatility and uncertainty. In fact, they may come out of this stronger than ever.

Before shutting this one down, there’s one interesting question I‘ve been asking myself: would the shift in consumption to gaming have been the same in other eras? For example, I grew up with Nintendo 64. If we had a comparable crisis in the late 90’s, would people have shifted consumption to gaming?

The social element of online gaming all but goes away. Watching your favorite streamer… not an option. Playing with your friends who are quarantined at their houses… not an option. Moving LAN events online, as we’ve seen from Activision Blizzard, Riot Games… not an option. Even buying a new game would require an in-person interaction, one that I managed to skip by downloading NFS: Heat. I guess maybe GameStop would have really been “essential retail” back then?

DeFi Gaming - An Entry Point for Web3 and Metaverse Adoption