The Opportunity in Deep Value

Note: Tobias Carlisle is the Founder and Principal of Acquirers Funds. Tobias is not an employee or representative of Roundhill Financial Inc.

Value investors try to buy stocks for less than they're worth. To find them, they hunt in the bargain bin, turning over ignored, and out-of-favor companies to find the few that have traded down below intrinsic value. The reason is that deeply discounted businesses offer better returns with less downside than their expensive peers. As Fama and French demonstrated in 1992 , value stocks have massively beaten out expensive stocks. But there's a catch.

There are many ways of determining value. The simplest way is to find stocks trading cheaply relative to a fundamental measure like cash flow. Legendary financial academic Ken French, of the eponymous Fama and French study above, has created a data library that tracks stocks based on their price to cash flow. French's data begins in July 1951 and runs through to May 2020. By definition, value stocks offer the most cash flow for the price. Expensive stocks have the lowest cash flows for the price.

According to French's data, cheap stocks have returned 226 times as much as expensive stocks since 1951.

But there's no free lunch in the stock market.

The trade-off for owning value stocks is regularly lagging behind expensive stocks. And the most recent bout of underperformance has folks asking if value will ever work again. 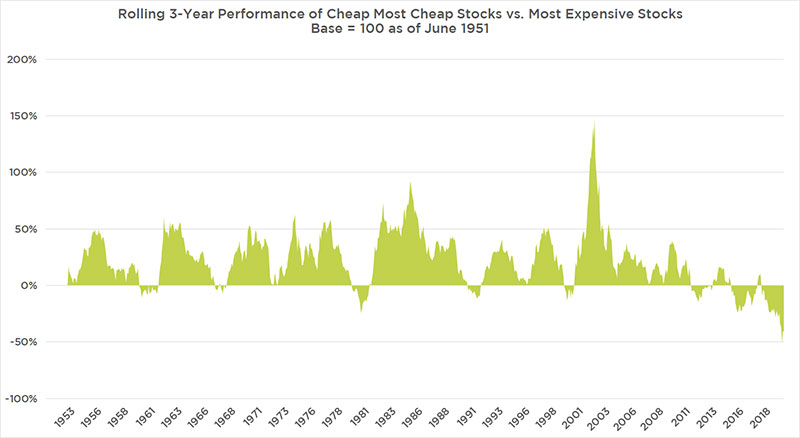 In the chart below, value is expensive when it is below the line, and cheap when it is above the line. This is calculated by comparing the difference in cash flow yields for value stocks versus expensive stocks over time versus rolling averages.

When value notably lagged in 1960, it started out below the line and moved sharply above the line, meaning it went from being expensive to cheap. In 1980, value lagged as it got sharply cheaper than average. Value significantly outperformed in 2000 as it moved from cheaper-than-average to more expensive-than-average. Most of value's recent underperformance is a result of it moving from very expensive--far below the line--in 2015 to cheap today--well above the line. This is more good news because it means value is well-positioned to outperform in future.

In short, cheap stocks (as measured by Ken French's price-to-cash flow data series) have significantly beaten out expensive stocks. The catch is regularly lagging expensive stocks. Cheap stocks lag most of the time, but when they lead, they lead by a wider margin. As the charts above demonstrate cheap stocks are currently lagging by the largest margin ever, and are cheap. This is good news for value investors because it means value is in a good position to generate good returns, particularly when measured over longer, 3-years holding periods.

This is not an offer or recommendation to buy or sell securities.