Roundhill's Intro to the Metaverse

Roundhill's Intro to the Metaverse

Since the ‘80’s, “cyberspace” has been a frequent topic for science fiction authors and futurists alike, who dreamed of a convergence of data. In cyberspace, a global network separated from everyday reality would allow millions of users to interact with each other, exchange information, engage in financial transactions, and play games, just to name a few applications. The commercialization of the internet in the ‘90s began the process of making cyberspace a reality, aided by the exponentiality of bandwidth speeds, miniaturization of hardware, and improvements in communication protocols. Much of what was theorized has now come to fruition, though the name cyberspace has been dropped for “Metaverse”, which more accurately describes the union of ideas into one shared space.

While the Metaverse is explicitly not a game, certain video games have features of what the Metaverse will eventually embody. For example, servers that can host dozens or hundreds of players, a virtual and robust economy, and in-game experiences created by other users, are all proto-elements of the concept. Three well-known modern games associated with this are Fortnite, GTA Online, and Minecraft, which are also three of the highest-grossing games of all time. This is no coincidence, as the nature of these titles keeps players returning for more, years into the game’s life. While many other elements must meld together to accomplish the Metaverse goal, such as millions of concurrent, synchronous players, gaming seems like the logical medium to serve as a testing ground.

Figure 1: Experiences make up the outermost layer of the Metaverse 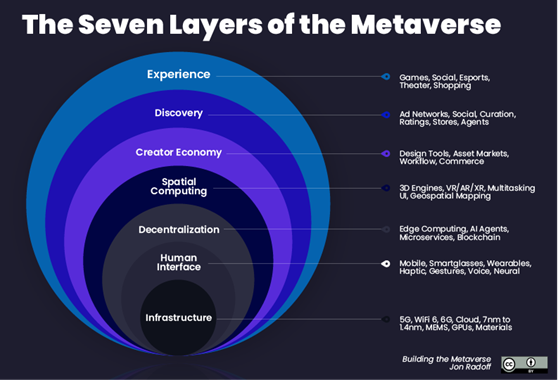 There are also platforms, including Roblox and Unity, that are showing great promise in achieving the overarching goal. Both of these companies essentially provide the engine and developer tools to those looking to create their own levels and games. As time goes on, platforms stand to benefit from improving digital infrastructure, which represents a major barrier to the growth of the Metaverse. Roblox is currently beta testing 700 person servers, but this causes significant lag within the Reality Engine, Roblox’s proprietary engine and simulation software. To ensure stability, engines cap how much data each player can transfer to the server. Graphical lag caused by a user’s hardware also poses a problem, though this will become less of an issue as cloud gaming makes inroads. Due to Moore’s law and rapid developments in networking technology, these issues are not far from being resolved.

Depending on who you ask, the Metaverse will be defined differently, given its sheer size and ambition. Below I will be summarizing Matthew Ball’s favored criteria, who has written extensively about the Metaverse on his website. Matthew is also the owner of the Ball Metaverse Index, an index constructed across seven categories that will technically enable the Metaverse. While there is no pure play Metaverse company yet, many enable one or more of the below criteria to varying degrees.

While the end state of the Metaverse has been conceptualized, the exact amount of resources and capital it will take to get there is unknown. Bridging the gap between physical and virtual spaces is going to be one of the largest undertakings of the century, and will be a breakthrough comparable to the commercialization of the internet in the 1990s. Technology companies across software, gaming, and components manufacturing will drive the bulk of the Metaverse’s infrastructure, while media and entertainment will populate the experiences located within the world. There will also be a significant commerce component, which should bolster brick and mortar retailers and enhance existing virtual marketplaces.

According to Bloomberg Intelligence, the global Metaverse opportunity could reach $800 billion in 2024 vs about $500 billion in 2020. This represents a CAGR of 13.1% over the 5-year span. However, this only represents the primary market for online game makers, gaming hardware, live entertainment, and social media. While these will all be crucial parts of the ecosystem, which will be driven by interactive experiences, the longer-term Metaverse must include relevant computing, networking, and payments companies as part of its infrastructure. Furthermore, even after a proto-Metaverse is created, development will continue and bespoke companies capitalizing on the evolving opportunity will emerge. While we believe that the development accomplished by the middle of this decade could be in the $800 billion range, incorporating these infrastructure companies and accelerating change more broadly could mean a $2.5 trillion opportunity by 2030, resulting in a 17.5% CAGR between now and the end of the decade. 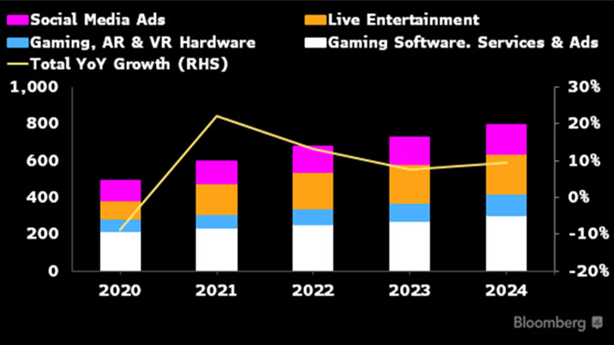 The creator economy’s role in the Metaverse’s ongoing development cannot be understated. While the task of developing infrastructure will mostly be delegated to corporations, individuals will be responsible for many of the cosmetic items and experiences that other users interact with. One of the closest parallels within modern gaming is with GTA V and its expansive creator based universe, within the GTA Online multiplayer. While the game is now in its eighth year of life, GTA continues to set revenue records among premium titles, mostly owing to the vehicles, apartments, and cosmetics that characters can personalize themselves with.

The “vanilla” experience is robust enough, but what has taken the title to the next level has been the GTA roleplaying community. Privately hosted servers like NoPixel allow 250 concurrent players to play as a unique character and immerse themselves in a virtual second life. The developers for NoPixel have created an experience significantly deeper than the base game, where players can have jobs, join factions, make friends, and build their own brand. At the heart of this experience are the players, which include some of the largest content creators on Twitch, like xQc and Summit1g. In May 2021, GTA had 253.4 million viewing hours on the platform, 46% higher than the second highest game, League of Legends.

Figure 3: Most watched games on Twitch for May 2021 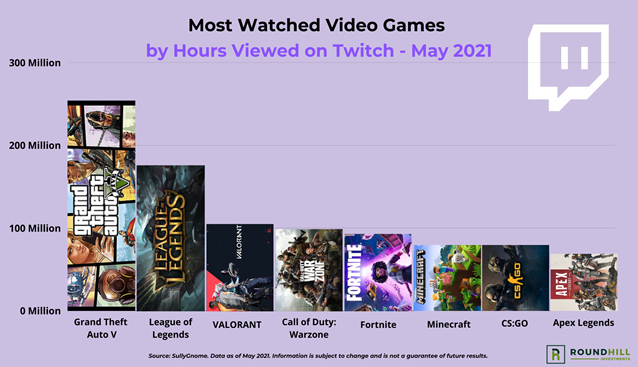 It is here that we again run into a restriction of current Metaverse-like titles. NoPixel can “only” hold 250 players, and the queue to enter the server usually runs into the thousands. While the map size of Los Santos is huge (about 30 square miles), it simply cannot fit the millions of players imagined by the Metaverse. The solution to this is to make Los Santos one of many interlinked experiences that players in the Metaverse can hop into, and make transactions fungible between game worlds. Again, the technology to accomplish this will be delegated to corporations, but individuals will be at the forefront of these experiences.

Roblox is both a platform and an engine that tackles the challenges of the Metaverse more explicitly. The company has already developed infrastructure with the Metaverse in mind, with constantly evolving capabilities for the engine and software, facilitating more creative games. However, almost every game is created by users not directly employed by Roblox, who are part of the “Developer Exchange Program.” This is a way for creators as young as 13 to get compensated for the success of their projects. There are even groups of players who come together to pool ideas and resources, and share in the success of their games. Fees doled out under the program are substantial for Roblox, coming in at $118.9 million for Q1 of this year, or 30.7% of revenues for the quarter. Creators will remain a pivotal part of the Metaverse, though they will be compensated directly by other users rather than through corporations.

The Metaverse isn’t going to come all at once, but will rather be the culmination of years of effort by corporations and individuals alike. In a way, we are experiencing an “early alpha” version of the Metaverse through certain video games, AR and VR experiences, ecommerce, and streaming services. Experiences will be one of the most crucial aspects, but they need to exist within sophisticated technological infrastructure. Luckily, the standards and protocols of this virtual universe continue to evolve, with various organizations and working groups collaborating daily to solve remaining impediments.

Users will be responsible for a huge amount of the content within the Metaverse, and will power its economy through transacting goods and services with other creators. The currency utilized in this world will be fungible, frictionless, and decentralized, free from interference by any government like fiat money. Consumers will be able to enter a virtual store in VR, without having to travel to a physical location, and test out products from the comfort of their home. Given the Metaverse is still nascent, the opportunities for most industries have yet to present themselves. What is assured however is the emergence of innovative companies which will tackle specific problems within this universe, both in the physical and virtual worlds.

How to Invest in the Metaverse - 7 Metaverse Stocks to Know