Penn's Acquisition of Barstool Sports - One of The All-Time Greats? 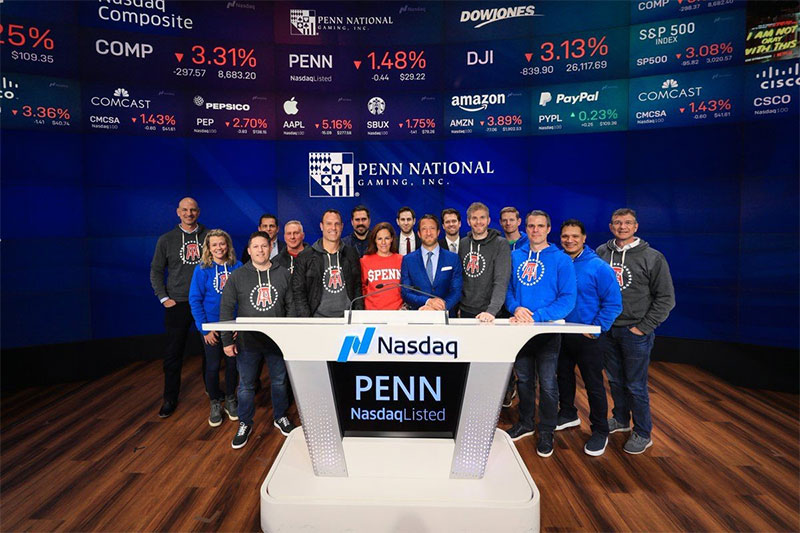 On January 29th of this year, Penn National Gaming announced that it was investing $163 million in Barstool Sports for a 36% equity stake. The $163 million consisted of $135 million in cash and $28 million in stock, and included warrants that would entitle Penn to majority control if exercised (after year 3).

At first glance, the deal may have seemed like little more than a tactical bolt-on acquisition. Barstool only generated ~$100 million in revenues in 2019, and while it was fast-growing (+53% and +65% revenue growth in 2018 and 2019, respectively), the media company remained only “modestly” profitable. Penn National, meanwhile, was a $13.9 billion enterprise value company. The regional gaming operator already managed 41 properties across 19 states, totaling $5.3 billion in 2019 revenues. It generated $1.4 billion in EBITDA for 2019.

Yet despite the minimal impact of the acquisition to Penn’s current bottom line, the market reacted right away. Investors loved the deal. To understand why, it's important to try and understand Barstool, and how it fits in the broader Penn story.

What is Barstool Sports?

Barstool Sports is difficult to explain, in the sense that the company itself is somewhat of an enigma. The company was originally founded by Dave Portnoy in 2003 as a print-only publication focused on fantasy sports and betting. In its early years, distribution focused exclusively on the Boston metropolitan area.

As technology advanced, so did Barstool. In 2007, the year the original iPhone was introduced, Barstool shifted to online distribution. And alongside the shift, the company would grow its fanbase exponentially, primarily targeting young (and male) sports fans.

As the company continued to operate outside of mainstream media, it naturally developed a cult following. While millions of viewers watched ESPN, they aren’t necessarily “ESPN fans.” Barstool was -- and is -- different. Barstool consumers are fans. They love the Barstool brand, and they love the Barstool personalities. They love what the company stands for -- unabashed sports entertainment that feels honest and “real”. Perhaps most importantly, throughout its history Barstool has continued to offer an escape from the increasingly buttoned-up sports content on linear TV.

Check out our coverage on the Barstool Sportsbook Launch. Opening weekend numbers, downloads, and more!

Fast forward to today, and Barstool has further leveraged technology -- social media, podcasts, blogs, YouTube -- to expand their reach and build diversified business lines. But while revenues have grown significantly, the company’s personality remains the same as it ever was. 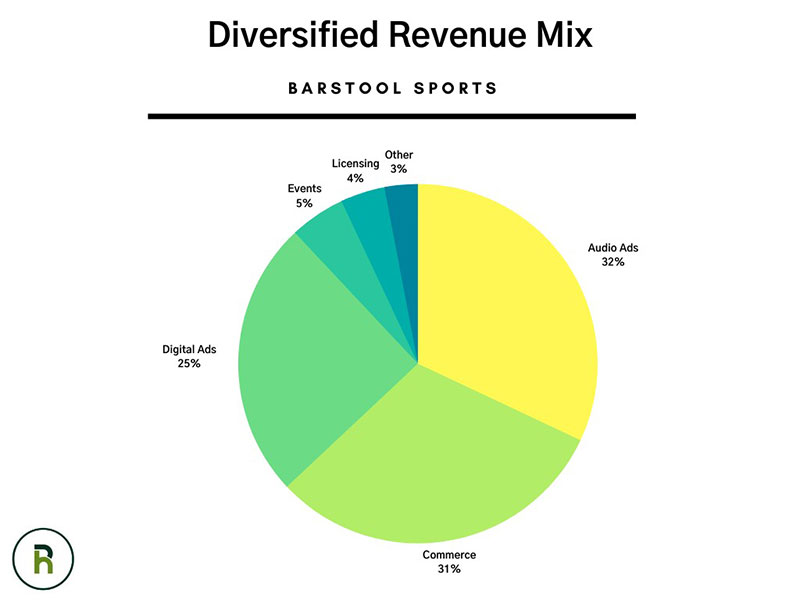 But as we alluded to earlier, Penn didn’t invest for the present -- they invested for the future.

How big is the U.S. sports betting opportunity? It depends on who you ask.

Various assumptions abound in each forecast, most importantly those related to the state-by-state regulatory process. In addition to the sports betting estimates, various sources (Bettor Insider, Statista) are calling for tens of billions in additional gross gaming revenues from iGaming -- which includes online games such as blackjack and slots.

Despite the potential TAM, the U.S. market is currently modest in size (especially relative to mature markets like Australia and the UK). This means that sportsbooks are focused on customer acquisition and scale, favoring top line growth and user acquisition over short-term profitability. After all, we are in the midst of a 21st century “digital gold rush”.

Historically, the gamblng industry has focused on client acquisition via a combination of third-party lead generation and traditional advertising (where permitted). In more recent years, the model has in part shifted to more involved partnerships with linear broadcast networks, including William Hill / CBS, Fox Bet / Flutter, and more recently PointsBet / NBC. The thought here is simple -- eyeballs build brand awareness and eventually lead to new customers.

In the game of customer acquisition, lower costs are king. That’s where Barstool fits in.

Penn’s investment in Barstool is an investment in the future. As illustrated below, 65% of Barstool’s audience -- which as of January included 66 million unique visitors a month -- is aged 21 to 44. 38% comes from the highly-coveted 21-34 age range. 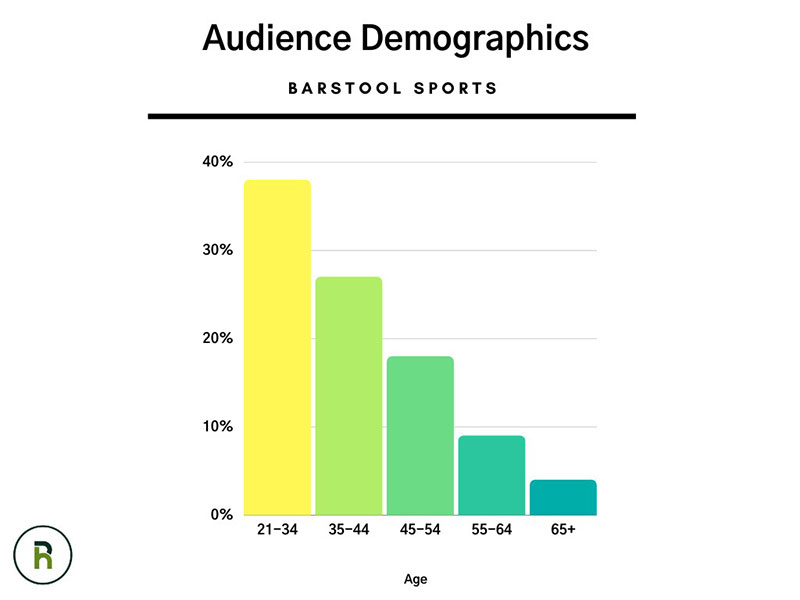 Many skeptics will highlight that younger bettors don’t have the wallet size of their older counterparts. While this is true, Penn’s Barstool investment is setting them up for the next couple decades, not the next couple years.

Barstool’s social media following is also vast and significant. The company has tens of millions of followers throughout various platforms, including Instagram, Twitter, TikTok, and Snapchat. More importantly, they have been effective thus far in converting a social audience into paying customers, as e-commerce represented more than $30 million of Barstool’s 2019 revenues. They’re monetizing memes to the tune of tens of millions of dollars per year. 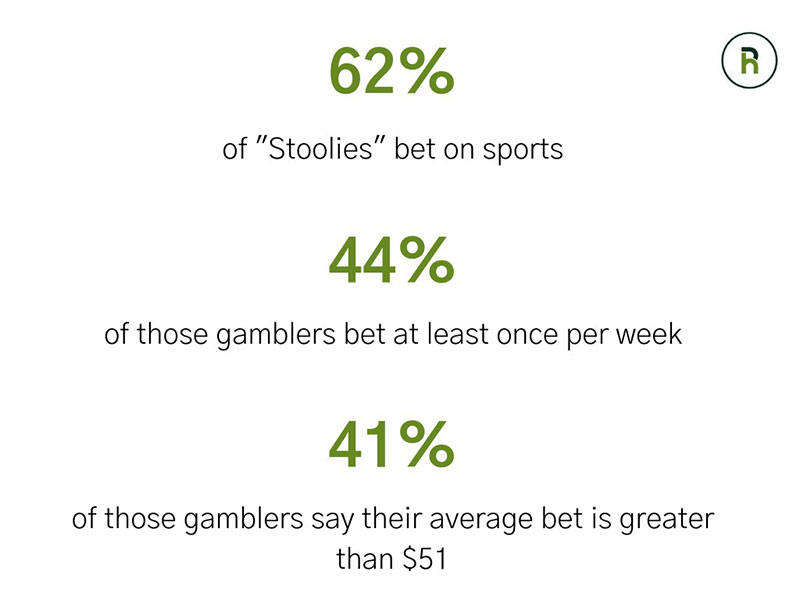 As such, we believe that Barstool’s reach can quickly translate into an effective top of the funnel for Penn’s brick and mortar casinos, but more importantly, leverage its brand to launch a successful sports betting app to compete with the likes of DraftKings and FanDuel. While the Barstool-branded mobile betting platform hasn’t even launched yet (it’s due later this month), Barstool’s current brand is on par with the current market leaders in U.S. betting. 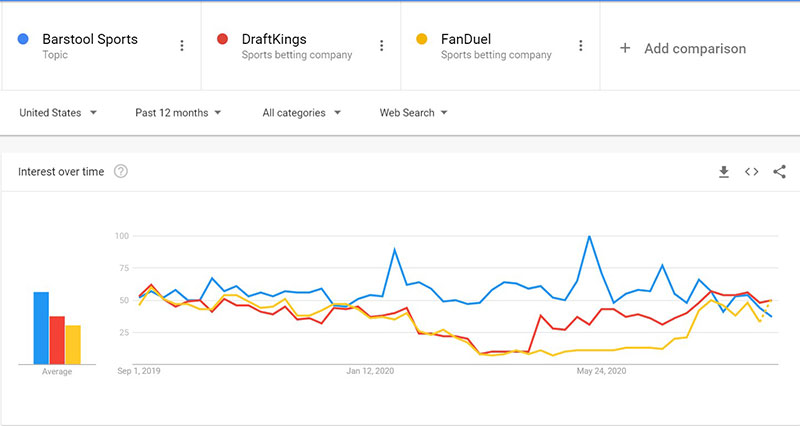 This has translated to significant app download volume for Barstool Bets, a free-to-play contest and entertainment app -- on par with that of BetMGM -- despite lacking any sports betting functionality. It takes years, if not decades, to build that type of brand loyalty. 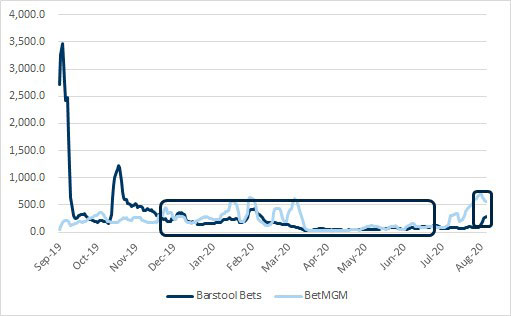 According to Goldman Sachs research, Barstool also provides a combined Penn / Barstool with a more significant bettor database than established peers. They derive a betting audience of 29 million (12 million males aged 21-34) versus 8 million and 4 million for FanDuel and DraftKings databases, respectively.

This is all to highlight the significant value that Barstool will likely bring into the Penn ecosystem. On the company’s second quarter conference call, Penn highlighted 25% growth in the 21-45 age demo for its regional brick and mortar assets, likely a direct result of the Barstool tie-up. To further this point, I can’t ever recall a “bolt-on” deal that ever had this kind of impact on brand awareness for the acquirer. If there’s a single chart that highlights why this deal is one of the best ever, here it is: 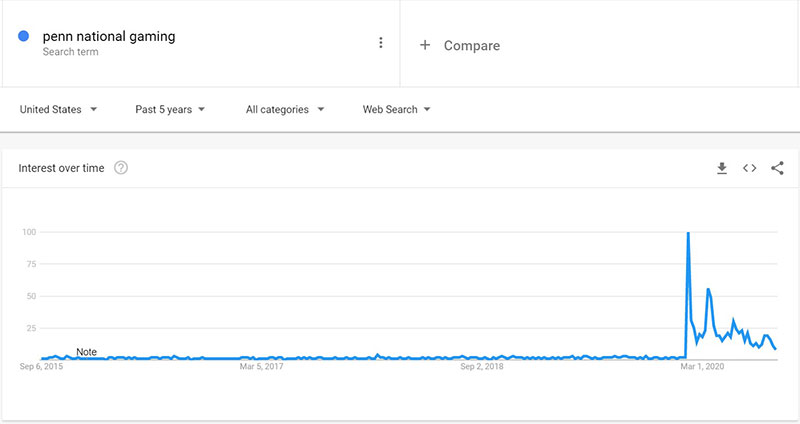 I think you can guess where they brought Portnoy and company into the fold. Moving forward, Penn and the Barstool betting app are well-positioned to capture market share in a multi-billion dollar market. Barstool brought the awareness, Penn brings the operational fortitude and existing presence in 19 states (several of which are yet to offer regulated mobile betting).

The company is called Barstool Sports, but the business has effectively become a diversified media brand, one that has been able to execute admirably during time without professional sports.

Examples of execution abound, but a few to note include: 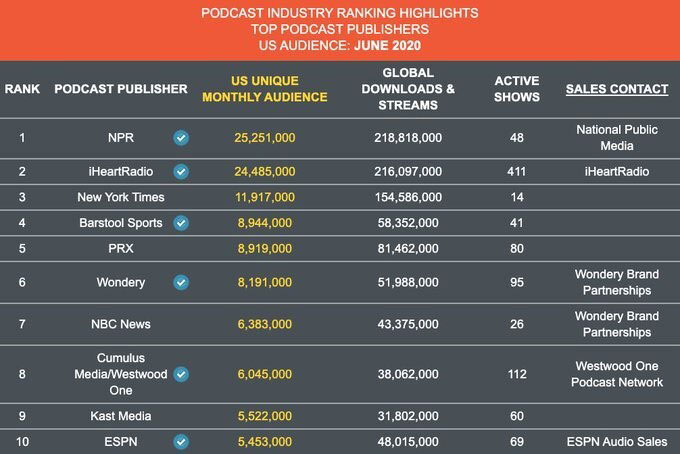 This expansion has highlighted the evolution of Barstool into a platform. Similar to a livestreaming platform like Twitch or distribution network like Spotify, Barstool has the ability to elevate the reach of the content creators and personalities it brings into the fold.

These individuals can not only grow their personal brand, but grow alongside that of broader Barstool (think content creators joining FaZe Clan, or 100 Thieves). This becomes a virtuous cycle of improved talent = improved brand = ability to acquire even better talent. Just this month, Barstool signed a multi-year deal with ex-NFL star (and TV network host) Deion Sanders.

A different (and improved) story Below is a comparison of EV/EBITDA multiples for Penn versus its peer group. As you can see, only one company, Penn National, is getting credit for adapting and evolving towards a digital-first future. 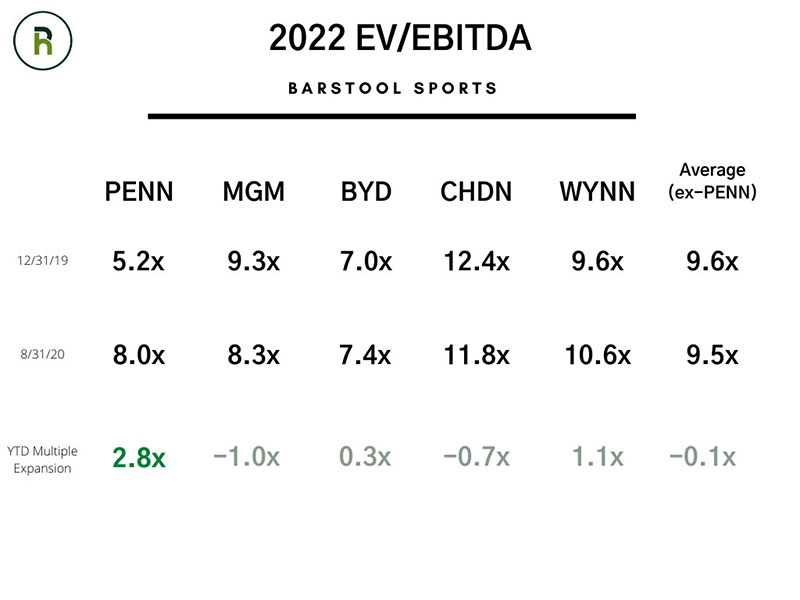 When Penn announced the Barstool acquisition in January, the company’s prospects changed overnight, if only in the eyes of the stock market. Once a little-known but profitable regional casino operator, Penn was transformed into a digital-first media and online betting powerhouse. They still have to execute and have a great deal to prove, but narratives matter in the stock market. And in terms of the market, the Barstool acquisition is certainly one of the all-time greats.